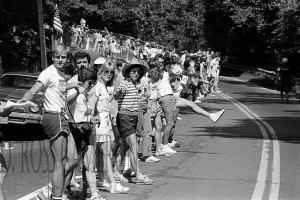 Hundreds of participants along Route 206 join the Hands Across America fundraiser to combat hunger homelessness in the United States, Sunday, May 26, 1986 in Princeton, N.J. Nearly seven million people are believed to have taken part in the event, which had one end in New York and the other in Long Beach, Calif. (D. Ross Cameron/North Jersey Advance)